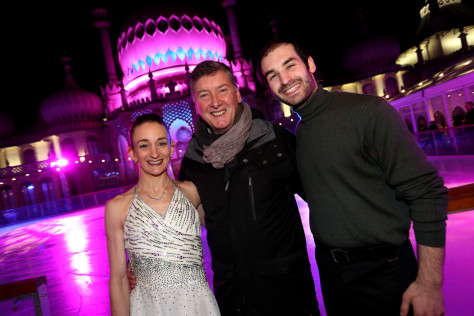 Olympic hopefuls Zoe Wilkinson and Christopher Boyadji skated their way into the new season of the Royal Pavilion Ice Rink at the VIP launch party last night, introduced by Olympic figure skating champion, Robin Cousins. The figure skating duo treated guests to a magical display to the song ‘The Prayer’ by Josh Groban and Charlotte Church, before the ice was opened to guests for the first time this season.

The rink opens to the public at 10am this Saturday November 5 until 15 January 2017, when visitors can expect a twinkling time on the ice and in the restaurant with its beautiful terrace overlooking the ice.

Zoe Wilkinson is two times British Senior Ladies Champion and has participated in the World Championships and European Championships before winning the ISU Adult Competition in 2014, the largest of its kind. Christopher Boyadji is 2013 British Senior Pair Champion and was winner of the Bavarian Open in Oberstdorf, Germany in 2015. Together they are aiming to compete at the Olympics 2018 in Pyeongchang, South Korea, however they are currently completely focused on the World Championships taking place in Helsinki, Finland in Spring 2017.

Robin Cousins officially launched the rink, saying: “The Royal Pavilion Ice Rink is stunningly beautiful with its Regency Palace backdrop and it was great to see Zoe and Christopher perform in such a lovely setting. We hope that visitors to the rink will be inspired to go on and skate more in the future.”

Said Mayor of Brighton, Cllr Pete West, who attended the launch: “My family and I have had a really wonderful time at the launch of the Royal Pavilion ice rink. We always love it here, both taking a spin on the ice and enjoying the restaurant. The city is so lucky to have the rink here every winter and in such an amazing location.”

Guests were also treated to a performance from talented young figure skaters Sophia and Curtis Elton, who have ice danced and played music on TV as well as for royalty.

With the former Royal pleasure palace as the backdrop and huge rink-side bar and restaurant with a 40 metre terrace, the rink is beautifully lit at night and is a great choice for those who want to skate in a twinkling setting as well as sit down to eat après ice.

Situated just 50 minutes from Victoria by train, all of Brighton’s gorgeous independent shops are on its doorstep so visitors can get a little Christmas shopping in too.

The rink is a huge 880 square metres plus an additional beginners’ area and offers penguin skate aids and skate sizes from ‘just walking’ to adult. There’s no charge for spectating for those who prefer to sit and soak up the atmosphere and the stunning rink side Bar & Kitchen offers mouth-watering patisserie snacks, Christmas treats, a quick drink with the best view in the City and scrumptious sharing platters for families and friends to enjoy.

Tickets cost from £10 for adults (aged 12 and over), £7 for juniors (children under 12) and the one-hour skate times run from 10am to 10.15pm daily. Club Rinkidinks (10am – 11am daily) offers children under five the chance to skate for free when accompanied on the ice by an adult paying full price. There are also season tickets for those who want to learn to skate (check website for details) and great concessions for students. The box office is open from 9.45am to 9.45pm, but it is advisable to book tickets in advance.